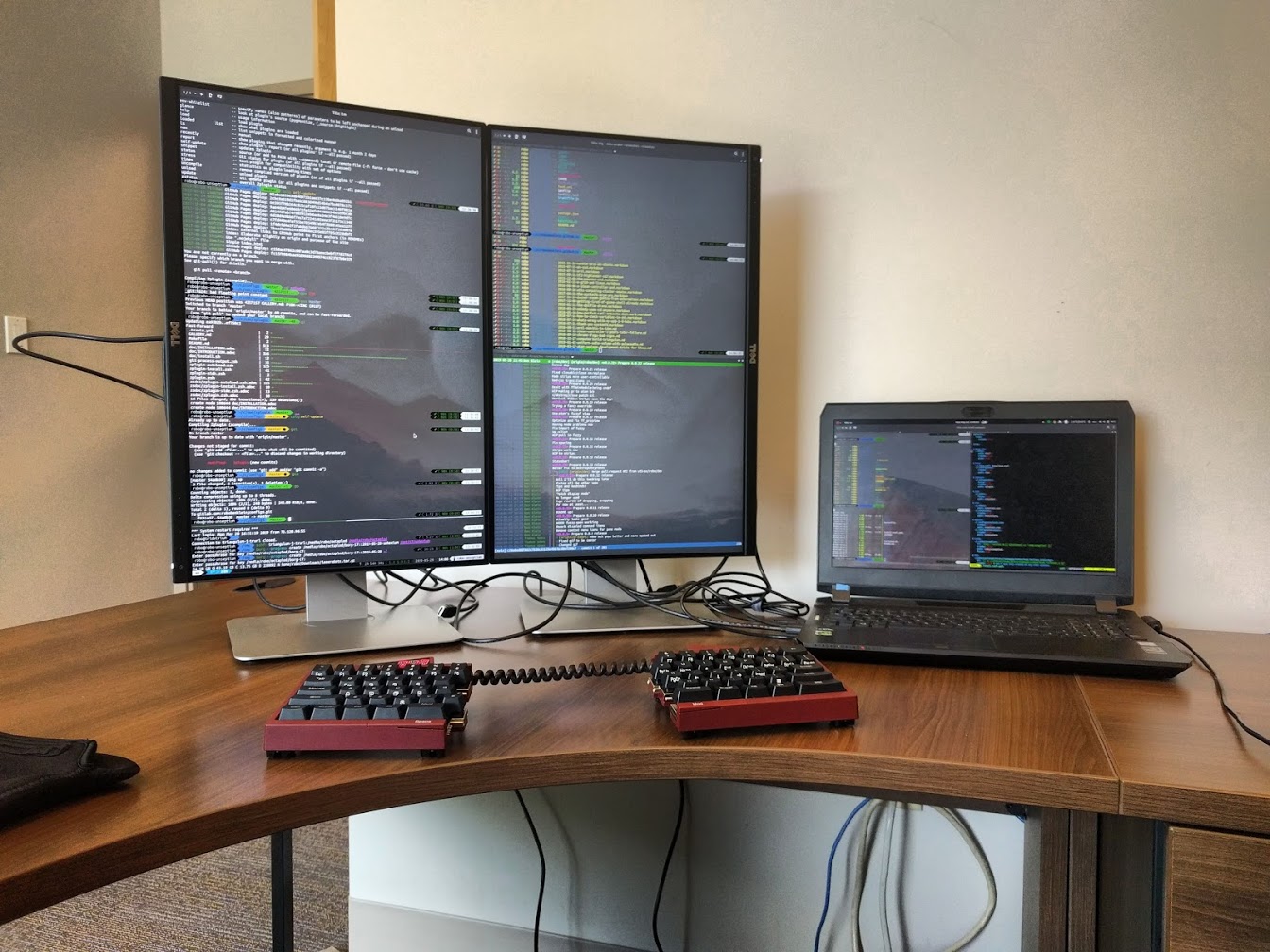 In December of 2018 I finally received my UHK after months of waiting.

After using it daily since, I’m 100% convinced that the UHK is worth the asking price, probably more, and I’m happy that I got it at an early adopter discount.

Currently at $275 USD it’s definitely priced like the split ergonomic keyboard that it is, but what I think makes this one worth that is the open source, hackable nature of the keyboard.

Here’s my thoughts after using it as my daily driver for many months,

At first, I wasn’t a complete believer in Kailh keyswitches, but they’ve held up very well and show no signs of losing their feel. Still prefer Cherry for the desktop fullsize keyboards at home, but on the go and around school I’ve still had a good experience with these switches.

For some reason, they offered Cherry Clear and Cherry Green, no other Browns besides Kailh. Since I was planning on using this board to take notes in class, low noise was a high priority.

After a month or two, the switches were still a bit loud to use for notes in quiet lectures, so I bought and installed some generic o-rings which helped to reduce the keycap to board noise, but the springback action was still tell-tale sound of a mechanical keyboard.

Overall the feel of of the keyboard has been excellent and there’s been no hunting for keys as everything is exactly where I expect it to be.

The #1 eye-catching feature is for sure the splitting action.

I pull it out of a carrying case in one piece, and it looks whole, then it “appears I just rip my keyboard in half” as one fellow student commented.

But the aesthetics of the keyboard are nothing compared to how much better my carpal tunnel syndrome improved since using the UHK in place of my laptop keyboard. In fact, the primary reason I bought the UHK was to deal with carpal tunnel and I’m impressed how I’ve recovered without losing any real productivity.

I suspect the largest contributing factor to my development of CT was the usage of the trackpad on my laptop. Having to twist my hand and finger to move from keyboard use to having my thumb at the nearest edge of the laptop for pressing mouse buttons was likely the repetitive strain that triggered it.

While split, I never need to move my wrists, instead, I move the keyboard so that it’s exactly where my hands want to rest naturally. Problem solved.

While splitting is certainly the most eye-catching features of the UHK, the LED display and steel plate construction also make it look (and feel) very premium.

You can of course order different colors of cases, mine being red, but the option exists such that I could easily grab a second case and customize it with paint or other mods.

In the future I will likely switch out the cable and keycaps to suit whatever design preferences I might have accumulated then.

Adapting to the unique layout

In the first month of usage I had to change the ordering of the bottom modifier keys in order to reduce the reach strain from my most common shortcuts, I currently have them laid out as:

The goal here was to keep Super close to the right thumb and Alt close to the left thumb, because Super- is my window management base on Pop_OS! and Alt is used for switching terminal panes (where the right hand applies arrow keys I/HJKL) and managing textual multi-cursor.

It was super easy to just pop the keys off, rearrange, and reconfigure in UHK Agent.

I doubt I’m in the majority here, but when I touch type I used to hit the Y key with my left hand, since the UHK though it’s forced me to fix that habit and use the closer hand.

Currently my biggest gripe out of the whole experience is the mini USB connector method.

The connector itself is better than micro USB, but the placement of the connector underneath the top flange should have a better method of securing it instead of a simple cable pinch hole. The cable almost never stays stuck in the hole and often just causes more stress as a bend point.

I would love a switch to type-C with a latch mechanism, or even just keeping the connector outward facing like the RJ11 bridge would be fine.

After the connector, my only other problem is that the bridge cable gets squished whenever I place the keyboard inside a sleeve. I can’t immediately come up with a solution for this, since the extra slack in the already curled cable is definitely needed, but you should note to buy a case with a little more room vertically if you don’t want a squished looking bridge cable.