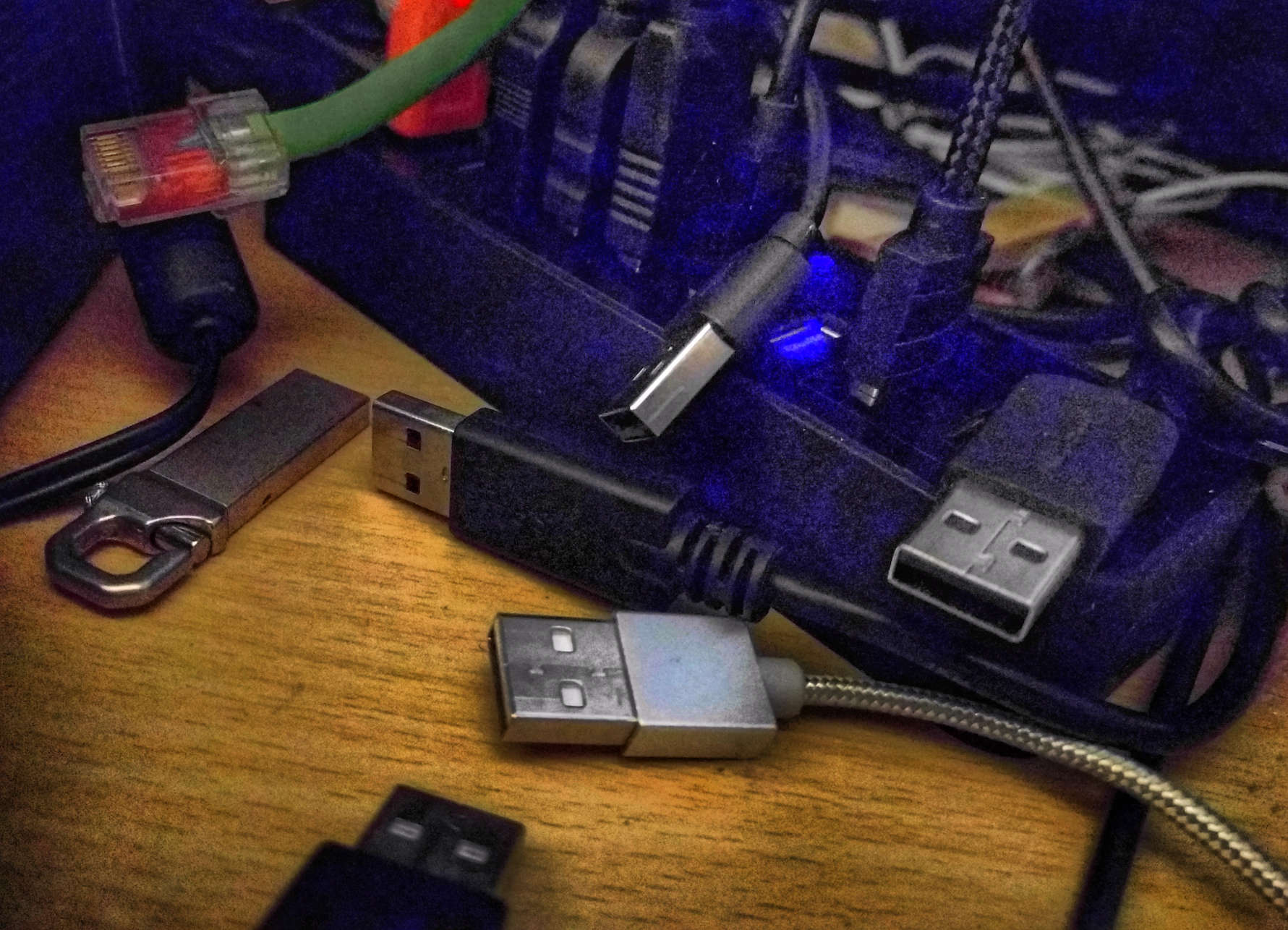 I’ve gone through two powered USB 3.0 Hubs now, one still kinda works, sometimes, the other, well I sent that one back because it didn’t even last 6 hours during my normal use.

But then I thought,

I just burnt the second powered USB Hub I bought, am I expecting too much from them?

The hubs which I’ve now broken in some way:

I still use the Anker one while I await shipping of other hubs, but it can only support ~4-5 of my devices at a time before it will occasionally reset or drop USB connections. (Most noticeable with the DSD USB DAC I have for my audio system - which screams when the hub has a disconnect hiccup.)

The GenBasic hub was dead within 4 hours of having all 10 ports populated. It burnt when I plugged in my headset to charge (the 10th device…) and after that it would not support more than 1 device connected at a time before the hub would continuously power reset. I returned this hub, it cost almost $90…

I don’t think there’s anything too unusual about my USB device setup either.

Yes, I have a lot of USB devices… but that’s why I’m buying these hubs… because they are supposedly higher amperage and have the minimum number of ports I need.

If you know of a 10-port or greater 3.0 hub that’s lasted you well, maybe tell me about it? (I just added a new page where you can find places to contact me!)

I don’t know if this is a common thing, but I have easily somewhere around 5-12 USB devices in use when I’m at my dock setup. Here’s what the USB tree looks like:

Already I’m at 11 devices, and I haven’t even plugged in any of my backup drives, or more than one flash drive, and yet somehow this is just too much for normal 3.0 hubs.

Can I make one myself?

I’m starting to wonder, I probably have enough electrical knowledge to purchase a usb controller board and ports, make my own hub but probably with overkill power delivery.

Although if it turns out not to be a power-related problem (some device sending bad data back up the bus?) then I will have a much harder time figuring out this problem. 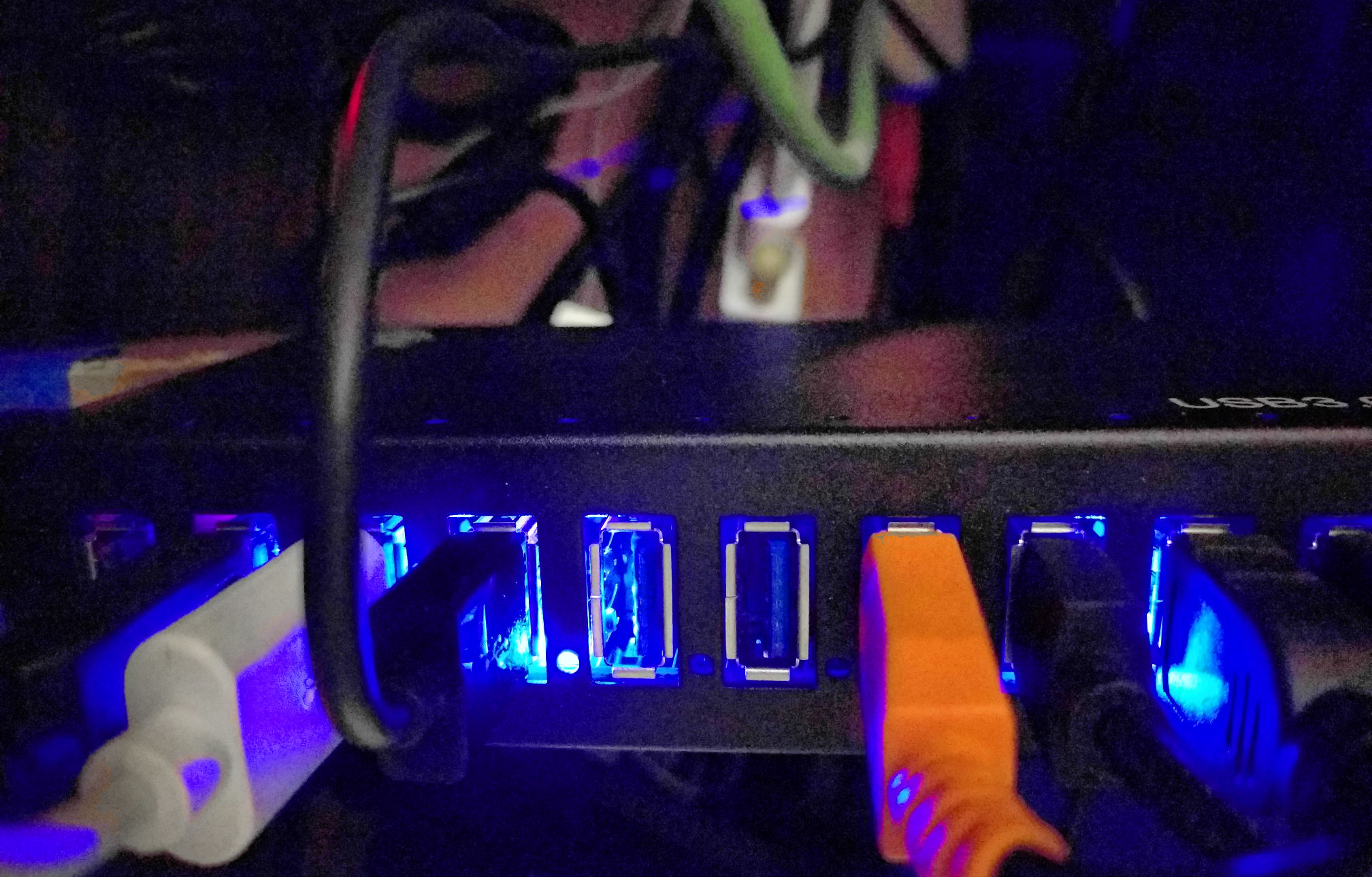 The unusually bright individual port status lights get somewhat annoying, but at least it looks really cool when they come online in sequence.

I think my condition is stable now.

I purchased an “iCONE” USB3 10-port hub in August, and it seems to have held up so far.

Unlike the GenBasic hub, this one is only 60W instead of 84W, but I have yet to see any power problems after plugging in most of my high-load devices.

There’s also nothing special about this hub - no QuickCharge or extra output ports, perhaps leaving less components to fail.

Now, I haven’t stressed this hub by pulling the full 60W yet, but I doubt I will try to considering the track record so far. (Even though it does have overcurrent protection, it’s an $85 hub and it still works…)

Hopefully this holds up for more than just these few months, perhaps if it comes back in stock I may really try to push it; potentially ordering a second hub upon survival of such a stress test.

Wow I really either must be very unlucky or something is very wrong with my USB setup.

As of recently, that iCONE USB 3.0 hub that I mentioned in the Fall 2018 update has started acting up. This time, I’m not as suspicious of the hub as I am the other USB devices connected in my setup.

When I had everything plugged in as I normally do, occaisonally I’ll notice that a device or two just stops responding, and Linux can no longer recognize when it’s been unplugged, replugged, or even replugged into an entirely different port like those on the motherboard.

Since I’ve had this many issues with USB devices, I’m slimming down my number of devices I keep plugged in at all times to the bare minimum. I’m no longer suspicious of the iCONE hub because of how devices still wouldn’t show up even after disconnecting it and trying the device in other ports.

So my latest guess is that one or more of the devices or other integrated hubs on the USB chain are acting up or conflicting in some way. Since it’s such a nondeterministic occurence, my best bet is just to run different combinations of devices for a few weeks and see if the issue pops up again.

I would love to have a hardware USB debugger / interceptor, but I don’t think the expense is warranted in my case. Hopefully the malfunctioning device shows itself in time…