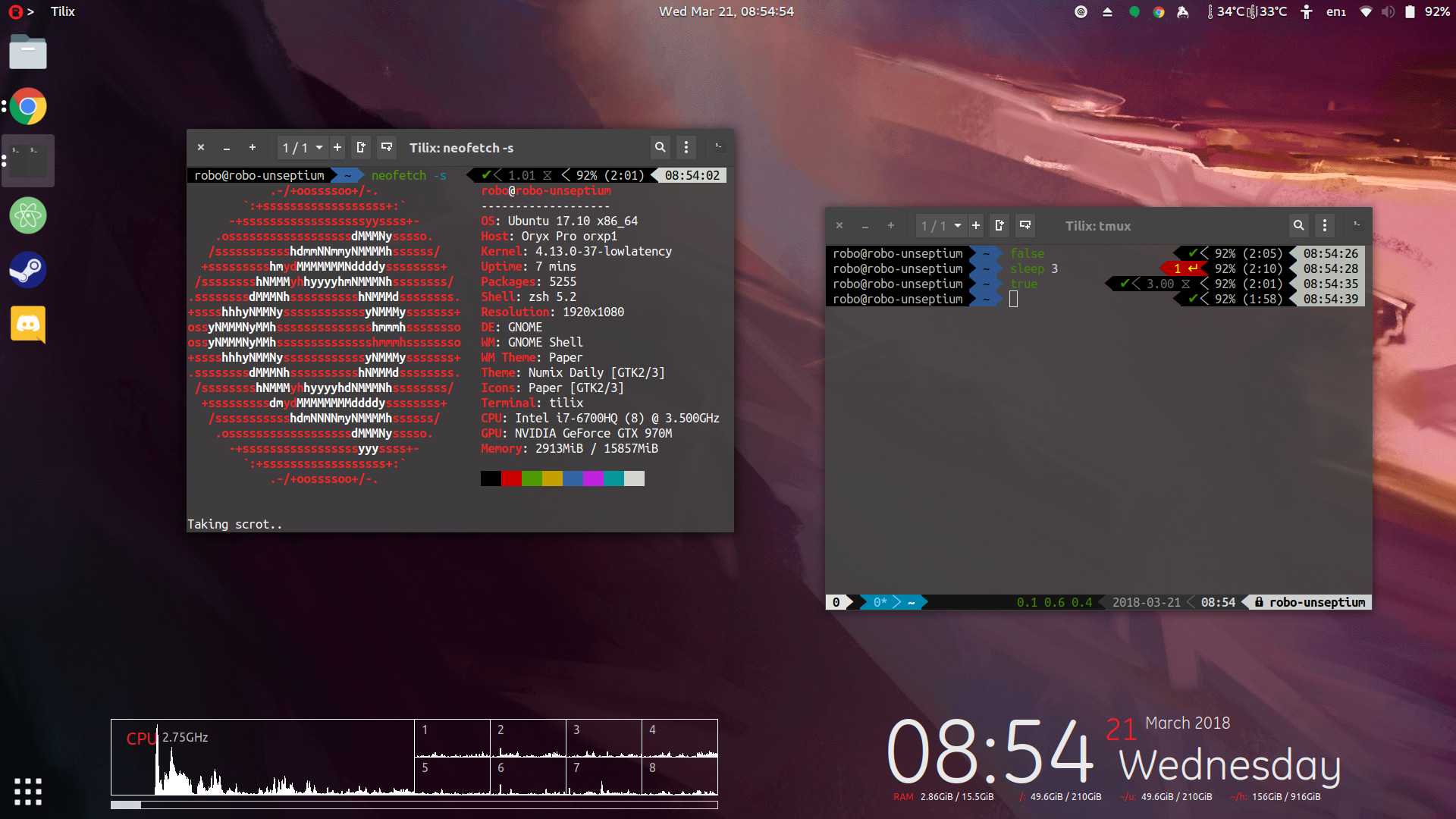 It’s only been a month. I’m already tired of Gnome Shell.

Man, I wish I had Unity back.

But for now, I guess that’s not gonna happen. (I prefer support and available resources to continuing to use a deprecated piece of software, so let’s pretend Unity was already sliced and diced for this article.)

Gnome Shell has had a number of issues in 17.10, hopefully getting fixed in 18.04. But for now, while I’m on 17.10 and fighting with a number of non-gui related issues, I just want a good desktop experience that I can get work done with.

The first thing I did was install the normal Gnome Shell instead of the Ubuntu packaged one, to get those system-installed plugins out of the way and start to set things up how I wanted them to be.

Since I’m on Nvidia and their propreitary (bleck) drivers, I’m sticking with X11, so I won’t be touching anything Wayland-related here.

Once installed, literally just browsed through the Gnome Extensions site and hoped that anything I wanted would install without having to modify the code myself. (There were a few plugins which don’t work on 17.10 that I wish I could have used as of writing this.)

Live unsatisfied for a month.

For about a month I lived and tried to get used to using Gnome, after giving up hopes and dreams of being one of the cool i3 users or going back in history to Gnome 2/Classic. (How tiling users manage to remember their window management shortcuts all the time is beyond me.)

I couldn’t stand it.

Gnome, I love what you’re trying to do here, but it’s just not working out between us…

Maybe now that Canonical has joined your forces you can get something better pushed out in the coming 5 months.

Gosh, they should make this setting available in the GUI, I mean, that’s their job isn’t it? To put stuff in the GUI?

I know Ubuntu pushed their own version, but really, it’s just too hard to compete:
extensions.gnome.org/extension/307/dash-to-dock/

I’m on a fast computer, I like to work fast, I switch tasks even faster, I guess I’m just impatient.
extensions.gnome.org/extension/277/impatience/

Waiting on some help with this one: askubuntu.com/questions/974549/gnome-show-network-manager-connections-not-just-ssids

Open the activities overview and search for something generic, ex. ‘set’, I only ever get 5 results, and can’t show more.

There’s got to be a fix for this somehow, I mean, they’ve got room for search results from other timezones, software which isn’t even installed yet, and passwords, but there isn’t even a “show more” button for the primary application search. 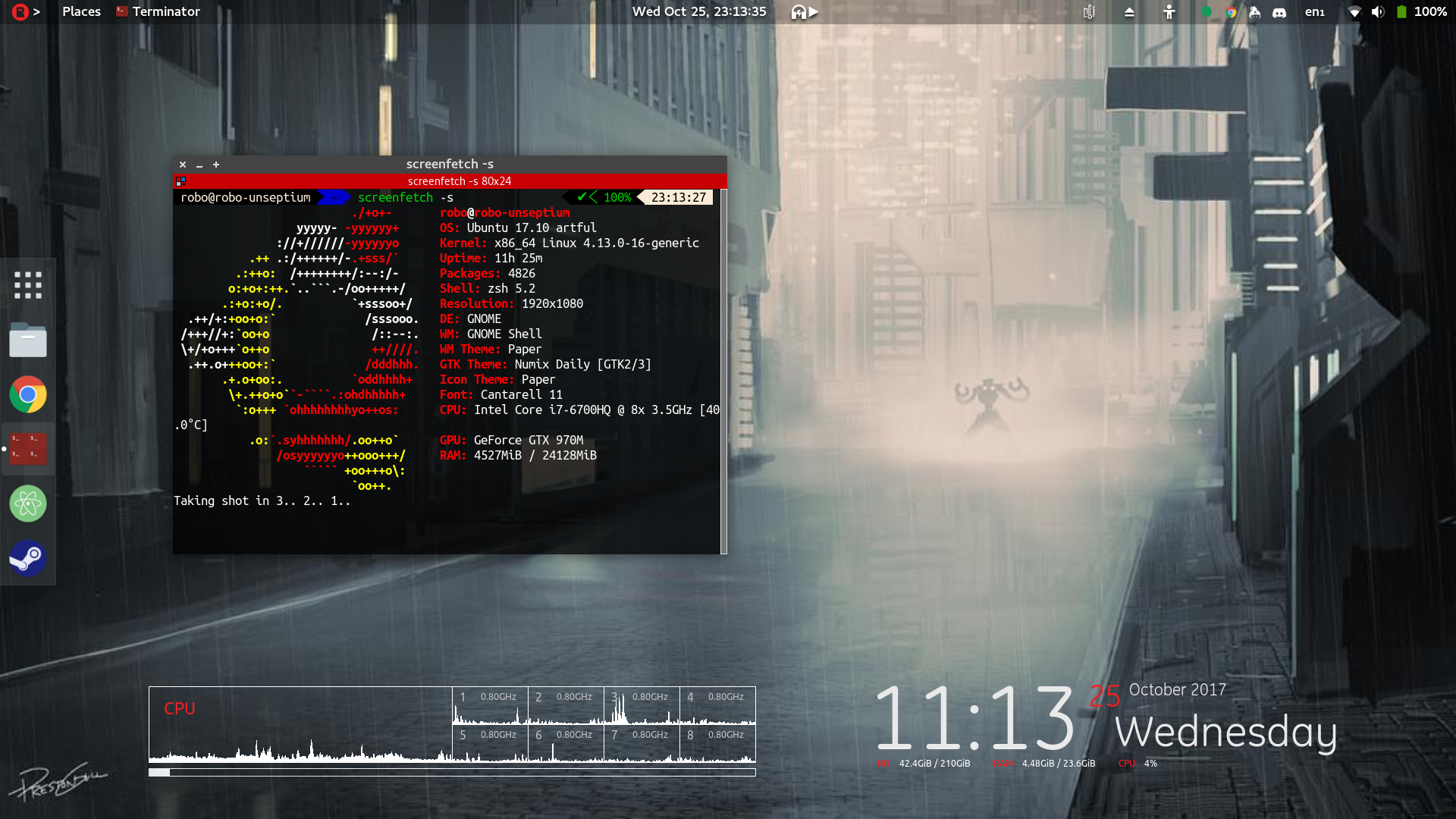 I’ve been happy enough to continue using Gnome Shell, but there were a few more things I changed.

Problems I still have:

I’ve been missing out on tiling functions in Gnome, by default it only makes half-screen splits vertically. Now I can make splits quite naturally with any set of windows and it’s surprisingly intuitive with only a single modifier key required to switch window management mode to ‘tiling’.

I missed a lot about Unity, but this extension brought enough back that I’m no longer set off by many subtle differences.

This extension added options for the system tray, notifications location, and other tweaks to get a more Unity-esque experience. Although I don’t use them all, the configurability is great.